Outside mount chimney caps are traditionally the fix for a leaky or cracked crown was to remove the crown and pour a new concrete crown. Unfortunately, no matter how much reinforcement or additives you put into the concrete, it will eventually crack under the stresses of the elements. Most of the time these cracks go unnoticed until it’s too late. Your chimney is affected by the elements more than any of the other masonry on your home. These caps help in keeping rain and snow off of your chimney, giving it a great weapon in the fight against the elements.

Chase covers generally top of a wood-built chimney chase. They are generally on homes built after the 1980s. The standard in new construction is to make these chase covers out of galvanized steel. Unfortunately, this is not a lifetime option and will start to rust around 10-15 years. If this rust goes unchecked, it will begin to form small hole allowing water into the structure. As water begins to pour into the chimney chase it starts to rust out the metal factory-built fireplaces and their pipework. This rust will cause weakening of the fireplace and quickly become a fire hazard. Unfortunately. Once rust is observed on a factory-built fireplace, it must be removed and replaced with a new fireplace unit costing thousands of dollars. Butler Chimneys installs only Painted aluminum or Stainless-steel chase covers that will last a lifetime.

Single flue chimney caps are made to protect just the top of one of the flue on your chimney. These caps help prevent water, snow, falling debris, and animals out of your chimney flues. They are a great budget option for stopping these things from entering your home. Butler Chimneys only installs stainless steel single flue caps. 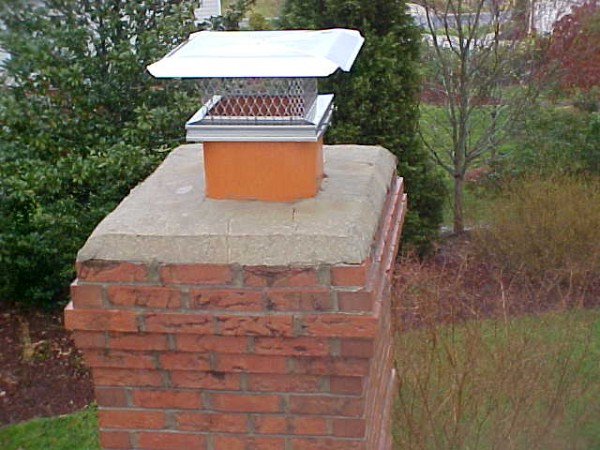 New FireplacesChimney Caps
Did you know...

According to the National Fire Protection Association (NFPA), defective smoke chambers are the third leading cause of chimney-related house fires.